What are the differences between a Dry iron Heavy iron and a Steam iron? 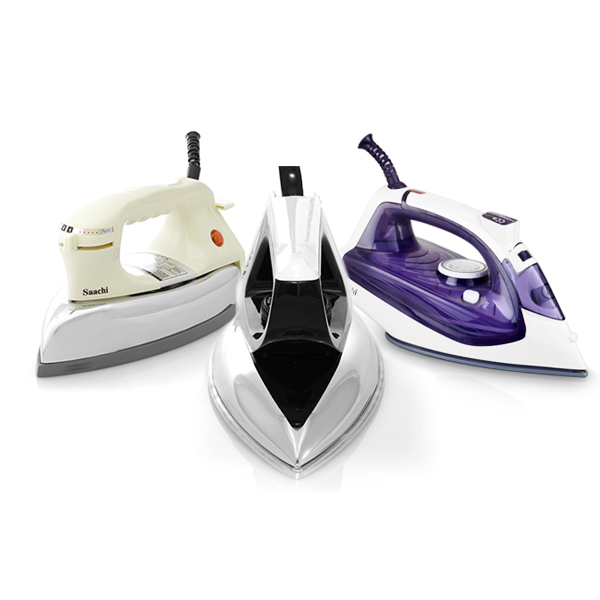 Ironing is a chore that most of us have had to do at some point or another in our lives. Whether you’re a bachelor working abroad or a mother preparing their kids for school, an iron is considered one of the most essential appliances in the household. However, in today’s market, there are a number of different kinds of irons available for you to choose from when making a purchase. The differences between these irons are not always clearly identified and so today we would like to outline the differences between a Dry Iron, Heavy Iron and Steam Iron.

Dry irons are the most traditional and commonly used type of iron. They usually have a stainless steel or aluminum soleplate that heats up to press the fabrics and straighten them out. As far as irons go, the dry iron is the most generic form of irons and is more than sufficient when dealing with materials such as linin, nylon, etc. Dry irons are usually the most budget friendly option when purchasing an iron.

Heavy irons, in other than a couple of features, shares a lot of it’s characteristics with dry irons. Where it differs is in the weight it carries as well as the material of it’s soleplate. The heavy iron, as its name suggests, carries a lot of weight when compared to a dry iron or even a steam iron. The increased weight makes the heavy iron ideally suited for thicker materials, such as certain forms of cotton, on which a dry iron may not be as effective. The heavy iron also boosts a ceramic soleplate as opposed to the stainless steel and aluminum ones of the dry irons.

Perhaps the most unique of these types of irons, the steam iron is the most modern and increasingly popular type of iron available in the market. Unlike the dry and heavy irons, the steam iron comes equipped with a water tank that is used to boil the water and produce, you guessed it, steam! The steam iron also has a number of tiny holes at the bottom of the soleplate to release the steam onto the various fabrics. Steam irons are the most suitable option for softer fabrics that might be too delicate for a dry or heavy iron. The steam bursts produced by the steam irons will not damage the fabric but can still efficiently eliminate wrinkles and creases form your clothing. The steam iron can also be used as a dry iron when no water is present in the water tank. Steam irons are usually on the higher end of the price spectrum as far as irons are concerned.

We hope this article helped identify the key differences between dry irons, heavy irons and steam irons. While some differences might be subtle and insignificant, others can definitely have a major impact on your purchasing decision. This article should help you make an informed decision on which type of iron is best suited for your everyday needs.

View all posts by Saachi-admin →